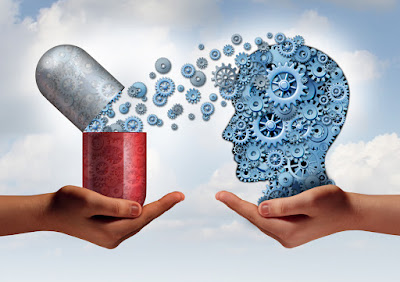 In the 2011 movie Limitless struggling writing Eddie Morra is suffering from chronic writer's block, but his life changes instantly when an old friend introduces him to NZT-48, a revolutionary new "smart drug" or nootropic. After taking the pill finds himself able to learn and analyse information at a superhuman rate and under the influence writes 90 pages of his book. Eddie starts experimenting with the drug - what might takes months now takes days - he finishes his book becomes a proficient piano player, becomes fluent in several languages and becomes an investment tycoon - predicting the markets and turning a small stake into millions.

While Limitless is fiction "smart drugs" or nootropics are fact - just google (or Bing) "buy nootropics" for bout 397,000 results! 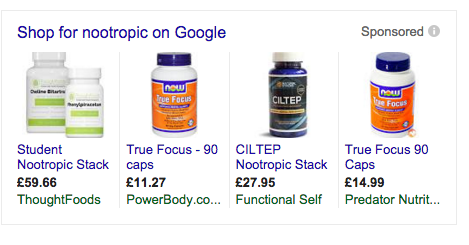 Smart drug use is more common than you might realise - where surveys have been done its common to find anywhere between 10% and 20% of people taking them.

Mind Bending
The psychologist and chemist C.C. Giurgea is credited with coining the term "nootropic" which comes from the Greek nous meaning “mind,” and trepein meaning “to bend.” Giurgea synthesized his first smart drug, called piracetam, in 1964.  Giurgea’s hope was that these drugs could enhance cognition, counter the effects of ageing, help children with speech disorders and other maladies, and treat post-traumatic stress.

What most nootropic users (noots or noanaughts) seem to be looking for today is enhancement of executive function through stimulating the cognitive processes involving attention, alertness, focus, concentration, working memory, problem solving, reasoning, the cognitive control of behaviour (selecting and successfully monitoring behaviours that facilitate the attainment of chosen goals) and just staying awake longer.

“We only have 24 hours in each day, and we are all trying to figure out how ... It's the unifying theme that connects Google with Uber with Nootrobox with P90X” ~ Michael Bradt

Its no surprise that Nootropics are a big thing in Silicon Valley - its an intensely competitive tech business environment - they see brains as systems that can be tweaked, enhanced, upgraded, optimised and monetised. Are smart drugs driving Silicon Valley - open the refrigerator in entrepreneur Dave Asprey's home and you may as well be at a pharmacy. To Get ahead in Silicon Valley: take nootropic brain drugs - Nootroo and Nootrobox are two San Francisco nootropics startups that launched last year. Their founders come from the tech scene and their products are squarely aimed at the tech crowd Each claims big-name Silicon Valley entrepreneurs and investors among their users, though neither will name them.

Nootropics are fundamentally performance enhancing drugs and analogies with doping in sport come readily. The surprising thing is that we also find between10% and 20% of people taking nootropics in sport - in fact the incidence of drug use for cognitive enhancement is greater than that for physical enhancement - brain doping is common in amateur sport ....  because many of the substances aren't banned.

Education is (rightly or wrongly) a mentally competitive environment and we shouldn't be surprised that students turn to 'smart drugs' to boost grades. High school and university are the primary competitive spheres of many people's lives, and ones that have significant bearing upon their lives, in terms of both career opportunities and future earning capacity. The pressure to succeed academically is very real, and in a climate in which high-stakes public examinations have increased demand for private tuition, it is likely that all avenues for performance enhancement will be exhausted. The possibility of purchasing 'smartness in a bottle' is likely to have broad appeal to students.

Universities have been warned of explosion in use of smart drugs and that Smart drug' taken by one in four students really does boost performance. As many as a quarter of students at Newcastle and Leeds and around one in five at universities like Imperial, Sheffield, Nottingham and Manchester claimed to have experimented with Modafinil – a prescription drug intended to treat narcolepsy using it to stay awake and alert for long periods and boost their performance in the run up to exams.

The effects and  effectiveness of nootropics depend on the individual but most of the effects "can be chased down to effects on alertness"  ... they won’t extend your mental capacity to a high order of cognition.”  The Journal of European Neuropsychopharmacology in a study on the most comon nootropic modafinal found that whilst most studies employing basic testing paradigms show that modafinil intake enhances executive function, only half show improvements in attention and learning and memory, and a few even report impairments in divergent creative thinking.

That evening, I began to feel the effects of modafinil's "wakefulness promoting agent". When I tried to get to sleep, I found myself unable to switch off until the early hours of the morning.

I worked endlessly until around 11pm in the office - editing, filming, writing - doing things I didn't even know I needed to do. I felt like I had to continue working, as opposed to wanting to do so.

While Nootropic Brain Drugs Rise in Popularity for Today’s Cutthroat Corporate Climbers Noots and noonauts using nootropics can in a sense be considered bio-hackers - experimenting with new drugs to enhance the human mind - increasing mental ability, upgrading their brains for  self-actualisation and to fulfil potential. The r/Nootropics, the Reddit forum (or “subreddit”) shows the personal price the noots pay for alertness—that piracetam has been causing chronic nausea, or that noopept (a peptide compound and powerful focus-booster) has them crashing down for days of sleep at a time. It’s the price that fringe users pay for messing with chemicals that haven’t passed through the medical community: Each one has a whole host of documented effects and drawbacks, and it can be tricky to determine what’s a function of the drug, or some combination of diet, exercise and personal biology.

The Royal Pharmaceutical Society says "smart drugs are only going to become more popular and, with time, popping a pill on your way to work or university may become the norm" - later blogs in this "Life Hack" series will look at the ethics and philosophy of cognitive enhancements.